In Thai reality television, “true” Isaan men are often pitted against half-Thai competitors, who are often more “international” and more English-savvy. In response, Isaan men argue that they should win because they are truly Thai. But that isn’t enough for reality television. Ironically, to prove their worth to other Thai people, these Isaan men have to speak English.

This summer, it’s happened with Isaan male models on The Face Men Thailand, which recently aired its finale on Channel 3. If you aren’t aware of it, The Face is an international reality television franchise where female models compete in teams headed by celebrity mentors to become “the face” of a major company. It started with franchises in the US, UK and Australia, all featuring supermodel Naomi Campbell as a celebrity mentor. The Thai franchise has already had three successful seasons, and The Face Men Thailand is the first season for male models out of any of the franchises.

This season’s winner will be cemented as a presence in Thai media. Besides a 1,000,000 baht cash prize, a 1,000,000 baht voucher (and work) with DNA Skin Clinic, he will work with L’Oreal, Head and Shoulders Thailand, Cathy Doll, Bangkok Metro Networks Limited, and appear in a Channel 3 television series.

In the first episode, there is an extended introduction with Mos from Surin. We see him walking around his family farm, fishing shirtless in a pair of blue jeans, doing exercises. In his voice-over Mos tells us:

“I think all the models these days look half-Thai (luk krung), look European (farang), or look Korean, but none of them look Thai like me. I’m going to go fight and show that Thailand has good things to offer.”

And fight Mos did. He won an individual challenge that helped his team, headed by Metinee “Lukkade” Kingpayome, win the week’s gladiator-themed runway challenge. And he made it to the second-to-last episode of the season. But another of his teammates, Gun, from Khon Kaen, was not as fortunate.

One of Gun’s standout moments came in the fourth episode of the season. When the team won the main challenge, Lukkade announced it by saying “We Won, Baby!” in English. While the other team members cheered their win, the camera focused on Gun’s utterly confused face. Accompanied by the show’s version of “music for humorous situations” that all reality television shows have, Gun quietly caught Lukkade’s attention to ask her “We won?” using the Lao question particle bo.

And in the elimination room, when he and fellow Thai contestant PK (who studies in Canada) faced mentor “Moo” Asava, PK argued for his continued placement on the show half in Thai and half in English. In effect, Gun was excluded from responding to things his competitor said. And in the end, Moo decided to eliminate Gun.

Though Gun’s argument doesn’t make much sense, and didn’t get him anywhere with the show, I don’t think it comes from nowhere. Gun argues for the worth of his Thai-Isaan identity after the show valued a wealthy Thai who studies abroad and speaks English more than it valued him. Gun’s argument certainly shares themes with Mos’ self-introduction as a fighter for Thailand against all the models who don’t look Thai. Although Gun and Mos could both solely identify as Isaan, when it comes to defining themselves against foreigners and luk krung, they ultimately choose to identify with Thainess.

As Gun’s rant continued, he spoke Lao again on the show:

(In Lao) “I know I could really improve myself. My dreams are over. I’d better go back raising cows and buffalo like I used to.”

(In Lao, with tears filling his eyes) “I love my grandmother, I love my family, I love luang dta [the title of an older monk, maybe the village abbot].”

The only times we see Gun speak Lao on the show are when he’s failing at something and English has been involved. Intended or not, it associates Gun’s failures on the show with his Isaan identity, speaking Lao and not understanding English.

These associations don’t only happen on reality television shows. They happen in movies seemingly on the side of Isaan men in the culture war against farang men, like the 2011 film “White Buffalo”, directed by Chinoret Khamwandee. Before becoming a film, it won Best Script of the 2007 Thai Script Project, and the movie received over five million baht from the Culture Ministry’s “Strong Thailand” fund.

In the film, Isaan protagonist Mark (Pattarapon Toh-oun, bottom center, image above) drops [or maybe, gets kicked out] out of Ramkhamhaeng University because he cannot pass an English exam.

In his home village, Mark finds farang men everywhere, and is even hindered from reconnecting with his childhood crush, Waewdao (Anusara Wanthongtak, top center, image above), because she will soon be married off to an older farang man. Doubly a failure, Mark turns to a village farang, who tells him (in Lao), that the village’s women marry farang men because they drink less and are more productive than their Isaan counterparts. With his new knowledge, Mark organizes similarly wounded village men to build a pond for raising fish. Sadly, all the fish die. When the men consult a book about raising fish, they learn the fish died due to lack of oxygen. Things look up for Mark when he finds a book on King Bhumibol’s Sufficiency Economy Philosophy (SEP). Mark builds a water aerator for the pond.

The film wants us to understand that Mark is solving his problems by doing the proper Thai thing and applying sufficiency economy. Following sufficiency economy is held to be a core component of Thainess, so much so that it appears as one of the “Twelve Thai Values” promoted by Thailand’s military junta. However, the film only manages to do this by imagining its Isaan characters as culturally deficient.

Even though they’re all Isaan villagers who should know farming, none of the men know how to make a fish pond. They have a book about how to raise fish, but either it doesn’t talk about how to aerate water, or the men don’t read it enough to find out. Mark reads the sufficiency economy book and then builds a water aerator. The film doesn’t need to strongly connect the two because its Thai audience already knows that the water aerator, like sufficiency economy, comes down from King Bhumibol. Like the film’s audience, the film’s characters should know this, but they have to be ignorant for the turning to Thainess subplot to work.

Returning to the film, Mark’s new-found diligence carries over into studying English under Waewdao, and leads him to finally pass his English exam and be able to graduate. With his English/university problem solved, Mark still has to win over Waewdao. He finds out that there is a dinner for Waewdao to meet her future farang husband, and he rides his white buffalo to go profess his love for her. Using both his newly-learned English, and the Isaan instrument khaen, Mark wins Waewdao’s heart, and they marry at the end of the film.

One could say Mark’s learning English doesn’t have much to do with Thainess. Even though we are probably meant to understand that Mark is motivated to learn by King Bhumibol’s example. Still, Mark learns English for the sake of Thai institutions and other Thai people, not foreigners. The English exam that Mark finally passes is a multiple choice exam where he has to recognize the sentences with proper grammar. It doesn’t have anything to do with actually using English to communicate. And Waewdao’s foreign suitor doesn’t understand a word of Mark’s English. It is entirely for Waewdao’s benefit.

The fix for Mark is to be properly Thai and to be willing to learn some English, so he can earn approval from other Thai people. And that is what Gun failed to do on The Face Men Thailand.

As for Mos, English didn’t hold him back on the show the way it did Gun. He made it to the next-to-last episode of the season, only to have his mentor Lukkade choose his teammate Philip (a Thai who grew up in Sweden) over him to continue to the final episode.

During the final acting challenge, Philip got in trouble for using too much English. Due to growing up in Sweden, Philip’s Thai skills were not up to par for successfully shooting a Toyota commercial, and he was critiqued for using too many English loanwords when acting. After the shoot, Philip apologized and promised to continue working on his Thai skills. In the end, having too much English and not quite enough Thai didn’t hold Philip back: he won the season. 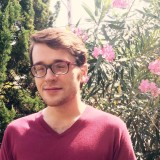