Skip to content
From Pak Mun to Xayaburi: It’s time to rethink hydroelectric dams along the Mekong

The rising demand for electricity is often touted as a reason for building dams. But the proponents of dams conveniently overlook the impact on those living on the river banks and the destruction of ecosystems. Ever since the Pak Mun dam was built in Ubon Ratchathani province, it has caused nothing but grief for the locals who had depended on the Mun river. Similarly, the Laos-built Xayaburi dam impacting the lives of thousands that live along the Mekong River.

The Mekong River has become a contested space for dam construction, with all of the decision-making power resting in the hands of governments and organisations such as the World Bank and the Asian Development Bank (ADB).

Lately, large companies such as Thailand’s CH. Karnchang and China’s Sinohydro have also become enthusiastic cheerleaders of dams, eager to use the Mekong River as a testbed for dam and fish ladder technology.

Dam equipped with fish ladders–a series of pools built like steps to enable fish to bypass the dam–require a great deal of engineering and large investments in their construction, maintenance, and management. The builders argue that they are being constructed and tested on the Mekong River in the service of development and poverty reduction.

During the dry season in 2019, Chinese dams in the upper Mekong River, such as the Jinghong Dam, retained most of the water because of lower rainfall in China this year. The Xayaburi Dam in the lower Mekong River is running tests prior to selling electricity to the Electricity Generating Authority of Thailand (EGAT) by this October this year. Laos has warned communities on the Thai side of the Mekong River to be careful with the water levels during the testing phase. As warned, the trials resulted in low water levels, affecting those who use the water for fishing, consumption, and agriculture.

Thailand’s Office of the National Water Resources (ONWR) sent an official letter asking the Laos government to postpone or suspend the trials. Meanwhile, the ONWR concluded that the Mekong’s water levels are in a critical state caused by three factors: 1) lower than usual rainfall in the region, 2) the Jinghong Dam lowering its discharge between July 9 and 18 this year, and, 3) test runs of Laos’ Xayaburi Dam from July 15 to 29, 2019.

On July 26, locals living on the banks of the Mekong River petitioned a court to order a suspension of EGAT’s purchasing of electricity from the Xayaburi Dam.

The current dam crisis helps us draw lessons from the Pak Mun Dam in Ubon Ratchathani province, which was completed in 1994. With multiple cost overruns and budget revisions, the dam was eventually built for a total of six billion baht, partially covered by loans from the World Bank.

The Pak Mun Dam sits astride the Mun River, a tributary of the Mekong River. From the start of its construction up until this day, the dam has all but destroyed the area’s ecosystem, fisheries, and way of life for more than 60 communities in three districts of the province.

The Pak Mun Dam eventually made it into a report–along with seven other dams worldwide–on the effects of dam construction published in the year 2000 by the World Commission on Dams, which was selected by the World Bank.

The commission found that in terms of electricity generation, the Pak Mun Dam was not worth the cost. It failed to reach its electricity generation goal of 136 megawatts. On the other hand, it single-handedly caused the loss of various species of fish and fish stocks, as well as affecting irrigation and agriculture on the banks of the Mun River.

In 2002, the Thaksin Shinawatra government asked Ubon Ratchathani University to study the effects of leaving the dam gates open, allowing water to flow through all year. The outcome of both studies are similar: with or without the gates open, the Pak Mun Dam negatively impacted the ecosystem, fisheries, and agriculture on the banks of the Mun, while failing to produce enough electricity to warrant its cost.

Another similarity between the Pak Mun and Xayaburi dams is that despite being built 30 years apart, they are run-of-the-river type dams which include fish ladders. International Rivers, an NGO, said this type of dam merely creates the image of an environmentally friendly dam. Such dams designs continue to harm the environment by impeding the natural flow of the water and discharging the water via diversion channels. They greatly affect the ecosystem of rivers, as evidenced by other examples such as the Belo Monte dam, a large dam in Brazil that has caused enormous damage to the surrounding forest and the lives of locals.

In the case of the Pak Mun Dam, EGAT itself said in its own assessment that “with a height of only 17 metres, it is to be considered a check dam, not suitable for retaining water. In order to store water, it must use up the entire water flow capacity of the Mun River.” Fish ladders were added when the construction of the dam was almost finished, owing to complaints that the original design would affect the migration of fish from the Mekong River to the Mun River. The Xayaburi dam is the largest check dam in the lower Mekong River, with a length of 810 meters and height of 28.8 meters. It has ten floodgates and seven electricity turbines.

When problems regarding the migration of fish and the flow of sediment were raised, fish ladders were installed at a cost of 19.4 billion baht ($62.2 million USD).

The water level in the Mekong this year have reached a record low, forcing CH. Karnchang to respond to criticism by issuing official denials that the Xayaburi test runs have caused the drying up of the Mekong River. The company said, “Every single drop of water that has passed through has gone through the dam and has resulted in clean electricity for both Thailand and Laos. All procedures are in compliance with the guidelines of the Mekong River Commission.” For good measure, CH.Karnchang also shifted the blame by claiming that the drying up of the Mekong comes from the activities of China’s Jinghong Dam.

Cultural ecology vs. the technology of power

Dams are a monolithic symbol of power and scientific knowledge. The existence of dams instilled governments with the confidence to address energy poverty and power the development of the nation on a large scale. To governments, dams are an easy choice to make since they produce clean energy and can lower greenhouse gas emissions.

But the construction of dams ignores local cultures that are intertwined with the abundance and cultural ecology of rivers. An example would be pla daek (fermented fish) of the Isaan and Laos people living on the left side of the Mekong River. Pla daek has long been a symbol of food and income security in Isan. Locals would use fish caught from the Mekong River to make pla daek to eat within the family, to offer as alms, or to trade with.

Cultural ecology is culture that is created by the adaptation of people to the natural resources available to them. They develop knowledge, know-how, and best practices in managing the nature that surrounds them. This cultural ecology is threatened when rivers are destroyed by the power of new technology that is controlled by governments and multinational corporations.

Rivers that were once a socio-economic and cultural resource, as well as a conduit for maintaining relationships between societies in the basin, will now be destroyed by the construction of more dams. Locals are becoming disadvantaged and are not receiving justice.

Thayer Scudder, a well known anthropologist who used to support dams and is now studying the environmental effects of dams towards the poor, believes that large-scale dams are not worth the enormous environmental and social costs.

Testing the technology of dams on the Mekong River comes at the huge cost of the river’s fisheries and ecology. It also destroys the local economy that is supported by natural resources such as fish, freshwater seaweed, and agriculture on the river banks.

Not only do dams contribute to the depletion of nutrients from the soil by withholding the natural flow of soil-enriching sediment, the flooding that is caused by water discharge can damage the crops and limit the utility of vast tracts of farmland.

Dams also have a nasty habit of encouraging governments and corporations to ride roughshod over community rights and local cultures rooted in the riverine ecosystem.

Is it time to ask ourselves whether this should be the end of dams. I propose that the construction of dams on the Mekong River should be suspended. Another study of the cross-border effects should be conducted by the Mekong River Commission. Independent academic institutions should be engaged to conduct studies with the considerations for civil society participation and cultural ecology which have previously been disregarded. The latter must be the main focus, beyond economics and the environment, in order to reach a joint decision between all groups that play a role in the management of the Mekong River.

This article was first published in Thai on August 8, 2019. Translated by The Isaan Record. 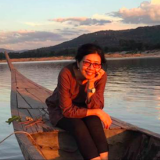 Kanokwan Manorom is the Director of Mekong Sub-Region Social Research Center (MSSRC), based at the Faculty of Liberal Arts, Ubon Ratchathani University. She earned her Ph.D in Rural Sociology from University of Missouri-Columbia, USA. Since graduation in 1997, she has been working in the Thailand and Mekong region in fields such as water  and land government, impact assessment, and agrarian change. Much of her work has involved with policy recommendations on dam and irrigation management in Thailand and the Mekong region. She has been working with a recognition research network, M-POWER (Mekong Program on Water, Resilience and Environment Research) for 8 years as Steering Committee
Scroll Up