Since the end of 2011, my friends and I have received many letters from prison. These letters were written by political prisoners who were persecuted for the burning of the Ubon Ratchathani provincial hall on May 19, 2010.

The political prisoners wrote these letters to my friends and me probably because in May 2011, lecturers from Silpakorn University and Ubon Ratchathani University, as well as activists from Chiang Mai province and some others, had been following the legal cases related to the government’s crackdown on the Red Shirt protests in April-May 2010. It included the case of the burning of the provincial halls in Ubon Ratchathani and Chiang Mai provinces. Together, we had set up a fund to help the families of Red Shirt political prisoners. We raised money through donations and by selling t-shirts and self-made pins.

The initial focus was on Ubon Ratchathani and Chiang Mai, under the slogan, “Don’t forget those in prison; don’t imprison them until forgotten.” This fund is still active and providing assistance.

After the provincial hall in Ubon Ratchathani was set on fire, the police issued 412 arrest warrants based on photographs taken during the incident. Sixty people were initially arrested, but their charges were dismissed. In the end, 21 people were sentenced for the burnings on August 24, 2011.

The rulings can be divided into five groups:

Group 1: Four people, who were sentenced to life in prison, had their sentences reduced by a third, resulting in a prison term of 34 years.

Group 2: Four people, who were sentenced to three years in prison, had their sentences reduced to two years.

Group 3: Three people, who were sentenced to one year in prison, had their sentences reduced to eight months.

Group 4: Nine people had their charges dismissed due to lack of evidence. The prosecutors had provided evidence of only photos of the suspects while attending protests, but had no other evidence that the suspects committed any crimes.

Group 5: One person was sentenced to one year in prison without parole. He is a Red Shirt leader who was prosecuted by the Department of Special Investigation (DSI) for terrorism. The court ruled that his acts did not constitute terrorism but he was found guilty of instigating people to participate in the protests. Because there was no evidence that he provoked the burning of the town hall, the terrorism charges were dismissed, and he was punished for violating the state of emergency law without parole and was later released on bail.

In December 2015, the Supreme Court delivered a sentence for 13 people, including the person in Group 5. The Supreme Court reduced a lower court ruling that handed down a death sentence to life imprisonment. The court also increased the penalty for two people–one who was sentenced to 33 years and four months in prison, up from two years; and the other whose charges were originally dismissed was given 33 years and four months in prison.

The Supreme Court upheld the other sentences passed by the lower and appeal courts. Four people who were sentenced to 34 years in prison had their sentences reduced by eight months.

Beginning in 2011, political prisoners in Ubon Ratchathani and in many other provinces were transferred to the Bangkok Remand Prison.

Since 2016, the man who was sentenced by the Supreme Court to life in prison and taken to Klong Pai Central Prison in Nakhon Ratchasima’s Sikhio district started writing letters to my friends and me. He wrote about his pride of being a Red Shirt and a fighter for democracy. He also joked about the injustice that he had received. Sometimes he would analyze politics and the economy, as well as mention his memories of being a young man.

There are certain limitations that we must be aware of: Each letter written by inmates to people outside of prison can be no longer than 15 lines. Therefore, if a person wants to write something long, they have to write several letters. All letters are screened and signed by prison staff with a stamp of approval.

Before sealing the envelope, the prisoner must write down the following sentence inside the envelope: “Male prisoner…with charges involving national security and sentenced to life imprisonment. Being an elderly convicted prisoner classified at the highest level, I ask for permission to write to the professor.”

During the past two months, I received two of his letters at a time, which formed a continuous text. Most of the content was about the health problems of inmates as well as sickness and death in prison. In these letters, he writes about the sickness of elderly prisoners and death before serving their full sentences. He notes that all this happened before the novel coronavirus 2019 started to spread nationwide.

Father “Ngai” is 74 years old. He is thin but active and energetic like most middle-aged people, but he has trouble hearing so I need to speak louder than usual when communicating with him. Every time I speak to him, I call him “uncle” and he calls me “grandpa.” It might be because he sees the white hair on my head, which is much more than what he has.

I’d become close to Uncle Ngai ever since I first set foot into Klong Pai prison. Wealso slept in the same cell. During the first year in Klong Pai, I would often feel pain in my wrists, ankles, and throughout my body. Uncle Ngai would give me a massage. It turned out that all prisoners had the same symptoms. Thank goodness I didn’t have scabies, eczema, or other skin conditions like the others. Since Uncle Ngai has trouble hearing and is from Loei province [reference to his accent], coupled with the fact that several of his upper and lower front teeth are missing, he can’t communicate clearly, or sometimes it’s easy to totally misinterpret his words. That’s why he likes to keep to himself and not mingle with others. But if anyone has pain and wants him to give a massage, he does not hesitate to do so. Many people are good to him, but there are also bad people who like to insult him and pick on him all the time. Sometimes I can’t stand it and have to…

…protect Uncle Ngai several times. During the past few years I have felt that Uncle Ngai has lost touch with reality many times and this occurs more often now. Whenever he sees me, he always says the same thing every time: “We will go home soon. Don’t forget to send me home, grandpa.” I would nod and smile to raise his spirits and reiterate his belief. I would see him pack his personal belongings in a plastic bag every Friday evening. Later, Uncle Ngai started to get sick. He had a fever and would cough and sneeze almost every day. Almost every night, he would talk in his sleep.

Before this, Uncle Siang from Nakhon Phanom province who was to be imprisoned for 14 years was sent to the nursing ward. Three days later, Uncle Sieng passed away despite having ten more years left to serve.

Before Uncle Sieng, Father Daeng, 65 years old, from Ubon Ratchathani who was sleeping in cell 14, passed out for no reason. He was in the nursing ward for two days and was then released five years early. Uncle Ngai hasn’t been able to eat and he is starting to stagger. We took him to the nursing ward, and only two days later, he left us too. He left shortly before COVID-19 came to visit.

…today, another seven elderly prisoners were brought into section 4 of the prison to replace some prisoners. Each person was sentenced to at least 30 years…I probably don’t have to tell you how all those people will go home.

I counted 85 letters that I received from prison that are with me now. This does not include the many letters that I sent to my friends and many others hidden in my bags and books.

Each letter represents their freedom to think while being imprisoned. I can only hope that they are strong and that they write me more letters. It would be much better if they were free and we could sit down and talk like before. 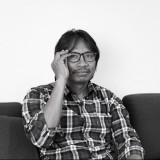 Teerapon "Tee" Anmai is writer and lecturer of communication arts at the Faculty of Liberal Arts at Ubon Ratchathani University.
Scroll Up