Skip to content
Chronicle of struggle of Phongsathon : Sensation of being accused of lese majeste

My name is Phongsatorn “Boy” Tancharoen. I’m 19 years old. I’m a sophomore at the College of Politics and Governance, Maha Sarakham University. I’m a political activist, member of the MSU Democracy Front, and one of those charged with defaming, insulting or threatening the King, the Queen, the Heir-apparent or the Regent according to the Section 112, resulting from the Nov. 25 protest in front of Siam Commercial Bank headquarters in Bangkok. I’d like to express my feeling as I’m being unjustly charged with this offence.

On the morning of Dec. 17, my phone rang, showing an unknown number. A police officer was on the other end, telling me to come receive a warrant at the Khwaoyai Police Station [in Bangkok]. As soon as I hung up, I started bracing myself for a new criminal case landing onto my lap.

Actually, before I was served, a well-wisher had already told me that I might be charged with Section 112. So I wasn’t  so flustered about it, and realized being charged with the offence in this manner is wrongful. It wouldn’t scare nor discourage me from continuing my political activism. Rather, it made me feel that I must fight back. I must move forward and try to make the most out of this occasion, taking the lid off and spilling the truth even more as I defend myself, to enlighten people in this country in seeing the roots of all the problems hindering development in Thailand.

I feel this way because, at the very moment I stepped into political activism, I  realized I would need to sacrifice opportunities that would come into my life in order to continue down this path, to fight for the cause that I believe in. I’m willing to give up that part of my life, give up days that I could’ve been studying, living like an ordinary university student.

I’m willing to give up the time I could’ve spent on myself, with my family, with my loved ones. I’m willing to let go of my youth, the chance to live without care in the world, surrounded by friends like any normal teen.

All the things I mentioned here are what people expected out of life of an ordinary teenager. For me, however, being able to live such an ordinarily, blissful life makes me feel bitter because there are millions of teenagers who have no chance to live like me, who barely have the wherewithal to carry out their lives as I have. There are yet millions of others who have to face hardships, with not even the opportunity of pursuing higher education, who have to leave their homes to find work, so far from their homes, far from their families, far from those whom they love.

Thinking about myself, I’m one of those with more opportunity, with more wherewithal in life. But instead I want to change society. I want to see equality. I want to see people as equal. I want to see the people in this country have a better life than this. So I’ve chosen to give up my comforts in life, give up all those life opportunities of my teen years so I can dedicate myself to a social movement that’s in accordance with my ideals, so that those millions of mothers and fathers and children and their children in the future can have happier lives.

I don’t feel a bit of regret for choosing to go down this road, even as I’m facing political persecution. I might end up in jail or even dying but I’m rather glad just the same that I’ve put my hand in something so that I can give voice to the problems in society I’d encountered growing up in Kalasin, one of the provinces with the greatest disparities in the country.

I grew up in a family of government employees. My parents are government employees. My father worked as a community developer and was promoted to his current position as a district developer. When I was young, my father liked to take me to work. Therefore, I got to see the disparity between the city where I lived and the countryside where my father went to do his job. It consistently instilled my mind with doubts about why our country cannot give the same quality of life we have in the city to the people in rural areas.

That was when I started to see the problems, and I continued to study and find out more information about what I was curious about, from both the internet and books.

I tried to find the answer to what the cause was of these crippling problems in Thailand. It came to the point that I felt I was done with just researching, and I wanted to do something to make use of what I’d learned to make changes. It took some guts to launch a movement.

In the beginning of my political activism, I did not say anything, or barely said anything about the monarchy in public because I was overwhelmed with fear. Back then, criticizing the monarchy was still a huge taboo. Many people who talked about it were met with ill fates, but it’s a fight that has continued to this present day.

I have a huge respect for people who’ve come out to criticize the monarchy. Besides being the first group of people that got me intrigued about political issues, they also helped enlighten me, and made me want to continue to fight for justice to critics of the monarchy who have died, been thrown into prison, or gone into exile. These are the people in the pro-democracy movement who’ve had a huge impact on the thinking of Thai people today, especially the young generation who’ve grown up in the internet era.

Finally, I’d like to say that, as long as justice is not given to the people who’ve fought for democracy, as long as true democracy is not achieved in this country, I’m not going to stop carrying on nor stop speaking out. I’ll continue the fight as long as I’m still breathing. 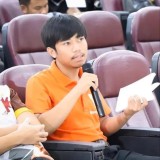 Phongsatorn Tancharoen is a student activist at Maha Sarakham University fighting for social and political change. His interests include social movements and Marxist theory.
Scroll Up