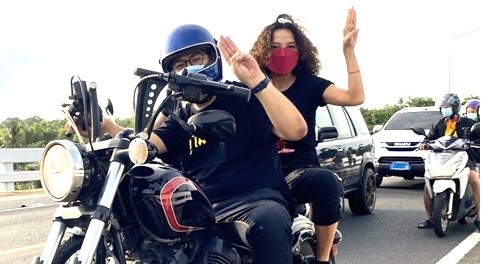 In a time of political dissent, people in the Northeast have turned to unique ways of protesting. From July to August 2021, people all over Isaan participated in over 40 Car Mobs, a new way to protest–from the safety of one’s car. In her latest contribution, Saowanee T. Alexander underscores how Car Mobs have embodied the hopes and dreams of the pro-democracy movement in the Northeast.

It was August 1, 2021. Roughly around 3:30 p.m., in the heat of the monsoon sun, I was sitting in my idling car with the driver’s door rolled down to where I could clearly see the vivaciousness of things around me.

It was just about a year after the sensational, unprecedented youth-led anti-regime protest activities started in mid-2020 that grew out of school and university campus protests after the Constitutional Court’s verdict dissolved youths’ favorite Future Forward Party in late February 2020.

After six years of being under the junta and the dubious “democratically elected” government, which still consists of familiar faces of members of the pro-establishment camp, 2020 saw for the first time emerging young protest leaders. There was support from Redshirt protesters, coalitions of different rights advocacy groups across regions, demand for monarchical and other institutional reforms, and numerous large-scale political rallies in Bangkok and elsewhere in the country, especially in the North and Northeast.

But as Thai youths were taking center stage as protest leaders, 2020 also saw the abrupt downfall of these young leaders and their supporters—with a bombardment of charges of so-called serious state security offenses, in-prison detention without bail for those charged with more serious crimes, and dwindling numbers of political rallies in sizes and locations.

In the first half of 2021, Thailand’s streets appeared to return to their “normal” state of quietness, partly due to the spread of COVID-19 and the disappearing street protests. Thailand seemed dark again.

Had the establishment once again succeeded in crushing democracy like it had done many times before? It was the question that I had been asking myself, including this very moment that my car was sandwiched by tens of other idling vehicles in the main artery running through the city of Ubon Ratchathani. But there was no rush. We were just waiting for a signal to move ahead once the activity at this particular stop was finished.

Yes, I was in a Car Mob—a political activity aiming to protest against Coupmaker-turned-Prime Minister Prayuth Chan-ocha. After wandering in all directions, my eyes stopped at the motorcycle being driven by a plainclothes police officer with another policeman as a passenger. They had been part of the procession and occasionally were even flashing the three-finger salute. They were doing the same thing I was doing–collecting information–but for the opposite reasons.

The author: “During Car Mobs I always had my windows down so I could clearly observe the reactions of onlookers.”

The “Car Mob” idea was first put forth by former Redshirt leader and democracy advocate Sombat Boom-ngam-anong. The aim was to protest against the government’s failed attempts at leading the country. The main goal was similar to the “Run to Oust the Uncle” activities held in January 2020—to force the ouster of Prime Minister Prayuth Chan-ocha and his close associates.

This form of protest was most publicized and garnered a great deal of participation in 2021, with the largest and most frequent in Sakon Nakhon, Nakhon Ratchasima, and Ubon Ratchathani. During the data-gathering period of research between July and August 2021, there were at least 43 Car Mob events in Isaan provinces out of some 260 such events throughout the country.

While I was a participant observer conducting research on the pro-democracy youth-led movement for empirical evidence for how pro-democracy people (note my use of “people,” not “protesters”) try to push the movement forward despite setbacks, the officers were gathering information probably for their higher-ups and perhaps to assess the situation on the ground for their “security” purposes.

I was pretty sure that many older, seasoned protesters, especially the Redshirts joining the Car Mob, could easily recognize security force personnel because of their experience on the ground. But the sheer number of vehicles ranging from small motorcycles to full-sized pickup trucks, testified to these protesters’ determination to return to the streets despite heavy surveillance and close monitoring from the government’s security forces.

Throughout the nearly five-hour procession of “Mob” vehicles trailing the main streets in Ubon City and its twin town of Warinchamrap, my observation of this Car Mob helped me to reflect on the question of whether the government has once again succeeded in crushing democracy like it had done many times before.

What did I see in the Car Mob?

The August 1 Car Mob in Ubon was joined by an estimated 200 vehicles, including motorcycles (forming the largest presence), cars, and pickup trucks. It opened with a symbolic activity by the organizers, some of whom were university students and some were associated with opposition parties.

Participants were from a wide range of ages, gender, and socioeconomic status. The fact that many were in the comfort of their cars with tinted glass and remained there throughout the event, they probably felt relatively safe despite the gazing eyes of security officers.

Throughout the procession, onlookers lining the streets were flashing the three-finger salute. Medical clinic staff, food vendors, electronic store assistants, and food delivery riders. This allowed me to gauge the sentiments of ordinary people who are busy going about their lives or those not interested in joining political activities.

The author: “At one point, the traffic was backed up because of the number of Mob vehicles, and the procession came to a stop, so I took the opportunity to hop on the back of a “cool” motorcycle.”

En route, a police officer directing traffic gestured to me and hollered, “Don’t you want to cover your license plate?” I yelled back, “No. I’m fine.” One participant decorated her car with an image deriding Prayuth. Despite her license plate being covered, she asked me at the gathering point after the procession whether she would be in trouble for mocking him. This suggests lingering concerns for potential repercussions.

The large crowd at the gathering point was a challenge for an equally large group of police officers scattered throughout the area and even mingled with the protesters. Speakers took turns criticizing Prayuth.

The atmosphere was filled with a mix of anger, disappointment, and frustration, but it was also a confirmation that democracy supporters were still here and trying to find a way forward—all the while blasting songs like rap song Prathet Ku Mi (My country has it), Rao Khue Phuen Kan (We are friends) and even random morlum songs in the background. But I did not think this was not for a festive mood; it was to warm the protesters’ hearts, making them feel they could do it and were doing it despite the risks.

The author standing on the base of a roundabout where the August 1 Car Mob procession ended and political speeches started. Photo credit: Teerapon Anmai.

The Car Mob that I saw showed a relatively strong political presence. The consensus was clear—with Prayuth as a target, people could unite in large numbers without much reservation.

Of course, certain more serious matters might have been left out at the cost of a compromise that still moved the protest toward its main goal. The Car Mob was something that was safe enough to bring people back together while others were recuperating from the mental or physical injuries suffered earlier from the elites’ backlashes against the movement.

The Car Mob was also an effort by different organizing groups, which I understood from my experience observing numerous protest activities, that tended to attract larger crowds and reaffirmed their sense of togetherness. Thus, the event was perhaps not anchored in the most progressive demands or took a confrontational approach to political expression.

Still, at least the Car Mob served as a platform for pro-democracy people to regroup and show their solidarity—a much-needed effort at a time when many were languishing in prison cells and there were profound doubts about the country’s justice system.

But is there hope? Has anything “ended” at all?

In my humble opinion: Yes, there is hope. But a realistic one would not expect the deep-rooted problem to end in “our generation,” as the movement slogan suggests, meaning any time soon.

As one of my informants, a prominent Isaan youth leader based in Khon Kaen noted, “What has ended? Their soft power! This is why they rely so much on crushing us with their hard power.”

Placing the informant’s remark in the context of the Car Mob activity, I do agree with him that because of the government’s heavy-handedness and the establishment’s willingness to do anything but listen to protesters’ grievances and demands, political activities would need to be diverse, creative, and responsive to limitations.

Note: This article is based on research materials collected for the research project entitled “Let’s finish it in our generation” : Thai youth movements in contemporary socio-political contexts,” supported by the National Research Council of Thailand’s “Spearhead Strategic Plan on Social Aspects of Khon Thai 4.0.” The author and the research team led by Associate Professor Anusorn Unno would like to thank the funder for this opportunity. All opinions expressed here are solely the author’s, however.

While Tha Rae district in Sakon Nakhon province is well known for having the biggest Catholic community in Thailand, the district may perhaps be even better known for a darker history as the former heart of the dog meat trade in Southeast Asia. Although most residents of Tha Rae no longer eat dog meat and the tradition has died down due to the influence of Buddhism, some locals in Sakon Nakhon’s Tha Rae district still consume it. This raises the question: “Man’s best friend or favorite meal?” Isaan Record intern, Russell Chapman, goes to Sakon Nakhon to explore the issue.

Thailand’s tourist industry has long profited from inhumane and exploitative techniques in handling elephants. The COVID-19 pandemic has placed new pressures on human-elephant relationships. The elephant tourist industry is on the brink of collapse and wild elephant habitats are coming into closer contact with humans than before. How can Thailand better protect its elephants while bringing attention to elephant welfare with advocacy? Guest contributor Mark S. Cogan looks into the issue.

PART III: The Role of Champassak Royals as Mediators

In this final segment of our series, “The Holy Man Rebellion(s) from both sides of the Mekong,” Ian G. Baird focuses on the role of the Lao royal family in the House of Champassak and the role they would come to play in colonial Laos and how its influence declined in Siam’s Northeast.

PART II: The Holy Men Rise and Fall Across Borders

In Part I of our special three-part series, “The Holy Man Rebellions from both sides of the Mekong,” Ian G. Baird described how the political dynamics between the French, the House of Champassak, and the Siamese all played a role in sparking sporadic millenarian movements in both the newly established French colony of Laos and the Bangkok-colonized Northeast of Siam. In this segment, Baird explains how the “holy men” of the period moved back and forth across the Mekong River, making it a significant cross-border set of events.