The motive behind the mass shooting at Nong Bua Lamphu which claimed 36 innocent lives is still a mystery. Some say it was due to stress. Some blame it on drugs. Some say it was triggered by a quarrel. The attacker is no longer around to reveal what exactly drove him to commit such a horrendous crime. The Isaan Record is at the site and talked to several people who might shed some light on this tragedy.

If not for the mass shooting that so quickly killed 32 people at the Uthai Sawan Child Development Center, Nong Bua Lamphu province, 25-year-old teacher Supaporn Pramongmook would have given birth to her baby boy in just a few weeks.

Tragically, the Pramongmook family will never have a chance to welcome the boy — their nephew, their grandson — due to the gruesome attack at the hands of former policeman Panya Kamrab in the afternoon of October 6.

Their waiting to see his innocent eyes seeing the world for the first time was suddenly over, together with the life of their beloved daughter, wife, and the family breadwinner.

Her body, along with dozens of small children who died at the scene, were brought to the Udon Thani Hospital, located about 70 kilometers away, to autopsies could be performed.

Pranee Srisutham, Supaporn’s mother, said after she heard the news of the attack, she was following the updates, but she didn’t really know what was going on.

“I waited until I was sure about what had happened, then rushed from my home in the afternoon,” she said with saddened eyes. “But by the time I got there, my daughter was gone.”

The family and husband (blue t-shirt) of Supaporn Pramongmook, a teacher who was 8-months pregnant when she was killed. Photo: Achawit Inha

After knowing she had lost her daughter, she cried until she had no tears left.

“My tears are falling inside. I can’t cry anymore. I don’t know what to say,” she said before telling a reporter to talk to her son-in-law, who lost his wife and their son in a flash.

“I also don’t know what to say,” he said softly, before lowering his head and looking down, avoiding eye contact with anyone.

Supaporn had been a teacher at the childcare center for over two years. She hoped that her son would grow up happily in her place of work along with other children of his age.

At the help center for the bereaved families, several therapists were stationed to help listen to their grieving and provide some comfort.

Many parents were devastated. They wouldn’t talk to anyone. Some never stopped crying. Some fainted several times.

Nearby, a number of small caskets were laid out, waiting for the children who would be carried home in them.

A bereaved mother looks at a casket. Photo: Achawit Inha

“Although we locked the door, he smashed the window and got through the door. I just ran away because I had seen him shooting people outside. I ran out through the back and climbed over the wall with another teacher and a maid,” she said.

After she had left the premises, she heard two consecutive gunshots. She thought he “must have shot the kids.”

After running a distance, she went to tell a deputy chief of the sub-district whose office was next to the childcare center. She faintly heard the brief cry of a child and then all was silent.

She asked the deputy chief to drive around to see what was going on and what they could do to help.

“I never thought something this horrible could happen. I called some people outside there for us to go in but they said not to because the man was still in there. When I learned that he had left, we went inside. And there we saw that small children, including teachers, had been killed.”

She said the attacker was usually a polite man, and he went there often to drop off his son. This time, however, he had looked different. His eyes were raging, like he was in great distress, or was angry with someone.

“He had dropped off his son here often. He was polite whenever we talked. But his son hadn’t come here for quite a long time, and he wasn’t there today either,” she said.

History of drug use

Police commissioner Damrongsak Kittiprapas told reporters on October 7 that the autopsy of the shooter did not find any traces of drugs in his body, but that didn’t mean that he hadn’t been using drugs. The shooter had a history of drug abuse that led him to be dismissed from the police force.

“We have information that he was a regular user, but we still need to investigate the motive to determine what triggered him to do this,” he said.

The shooter had been transferred to the Na Wang police station in Nong Bua Lamphu in 2019.

One of the shooter’s ex-colleagues at the Na Wang police station said he was great at his work. He could finish a case file very quickly. But he was discharged from the force earlier this year, after officers from the Nong Bua Lamphu City Police Station found out about his drug use.

“He was a quiet man, but was a bit aggressive as well. He was fun when hanging out with his colleagues. I never thought he would do this. He was bright. He graduated from Ramkhamhaeng University’s law school with second-class honors,” said his former colleague.

If he hadn’t committed this heinous crime, he would have been due for a court hearing the very next day on a charge of drug possession, after an amphetamine pill was found in his home.

Reporters asked about the possibility of foul play, as he had been arrested and fired over for possession of a single amphetamine pill. Gen. Damrongsak answered, “It is not easy to discharge someone from the force. Having only one amphetamine pill is still a crime.”

Officers prepare to receive flowers from Princess Sirivannavari in front of the childcare center on October 7, 2022. Photo: Hathairat Phaholtap

A hint to a possible motive came from Danaichote Boonsom, the chief of Uthai Sawan sub-district office, who said the shooter’s mother last month had come asking for help on her son’s drug charges.

“I [told her I] couldn’t help him. It was out of my hands. It was up to the justice proceedings,” he said.

A sea of flowers spread out at the scene as people mourned the tragedy, but that wouldn’t help heal those who suffered losses.

It also couldn’t help shed light on the motive of this former policeman, the so-called “quiet” and “polite” man. What drove him to commit this atrocious act against so many small children and innocent people?

Who else is there who might provide answers to these questions? 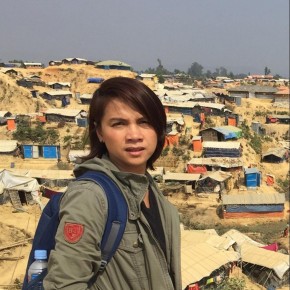 This year provided more sorrow than cheer for Isaan people, especially for those in Nong Bua Lamphu, who suffered a horrific loss after a mass shooting at a nursery killed 37 people, 24 of which were small children. People in Isaan across several provinces also had to endure hardships that came from floods and from many of the government’s construction projects. The Isaan Record documented and published these struggles that remain unresolved. For The Isaan Record, the year 2022 was one of greatest sorrow, as we suddenly lost our aspiring reporter and photographer, Adithep Chantet. In his short time, though, he created an impressive photographic world. We showcase a number of Atitep’s final photos as part of our “Photos of the Year 2022.”

When “homes” become “trash” : money can’t save houses damaged by the flood in Ubon Ratchathani

What would you do if you returned to your house three months after a flood only to find it in ruins, damaged beyond repair, a slush of garbage and mud obscuring any hint of a floor? This is what many flood victims in Ubon Ratchathani province encountered. They need to stay in their homes but first they need to eat. Meanwhile relief from the government is slow and insufficient. What are they to do? Songwut Jullanan from Ubon Ratchathani reports.

To my redshirt father, who is no longer here with me

The daughter of a redshirt grows up and comes to understand and appreciate her father in a new way. Although he died a decade ago when she was just a child, she now reaches out to him in a letter. Guest contributor Rattanapon Noi-Wong confronts the past and asks to join her father, as a […]

It’s been over a month now since the Mitraphap Community along Khon Kaen railway was confronted with major loss after their homes were submerged in meter-high water. The physical and psychological damage, though, remains – and has been overlooked by the government. Community members ask if the flash flood they’re forced to face is only seen as a necessary sacrifice for the city residents and the province’s economic hub to be spared from.