Disclaimer: The content of this review was altered due to legal concerns

The critically acclaimed director, who won the Palme d’Or for Uncle Boonmee Who Can Recall His Past Lives in 2010, delivered Cemetery of Splendour last year to the Un Certain Regard section at Cannes Film Festival.

Cemetery of Splendour tells the story of auntie Jen (Jenjira Pongpas) who has a bad leg and volunteers at a hospital converted from a school. The soldiers are bedridden with a sleeping sickness—because, as young medium Keng (Jarinpattra Ruengram) tells Jen, the hospital is built on the former grounds of an ancient palace, and the spirits of bygone warring kings are siphoning the soldiers’ energy for battle. Local shrine goddesses appear in the form of human women, and Keng channels the spirit of comatose soldier Itt (Banlop Lomnoi). In this film the past, the future, spirits, and a romance that crosses cultures and spiritual realms collide among the leafy forests of Khon Kaen.

The Spiritual, the Mundane, and the Political

Apichatpong displays an Isaan-ese magical realism, albeit set in Isaan. The boundary between the physical and the spiritual is rendered insubstantial; laws of logic and science do not apply in face of the ordinations of ancient kings and haunted graveyards.

The clairvoyant Keng communicates with the spirits of the sleeping soldiers, relaying questions from their relatives such as, “What do you want to eat?” or “What color should I paint the kitchen?” The spiritual is intertwined with the mundane.

When Jen goes to visit the local goddess’ shrine to ask for blessings in exchange for a couple of small animal figurines, the image may seem normal to local Thais and strange, but understandable, to foreigners. Yet when the goddesses themselves appear to her as humans in everyday dress (“Normally we don’t wear these clothes and makeup”), superstition crosses the line into magic and reality.

Time itself is also warped and non-linear. When Keng channels Itt for Jen, Keng/Itt points at the dry forest floor and describes jade bathrooms and toilet bowls of pink stone, conveying nostalgia for the lost glories of Isaan. “Now there’s nothing but rice fields,” she/he says.

If a space has held on to its spirits and goddesses throughout thousands of years, past glories can be remembered by even the present inhabitants. Apichatpong displays a Thai, Buddhist, even animist projection of time into the film: time is not linear, like the Western understanding of it, but cyclical, suggesting perhaps the cycle of rich to poor is just a state of impermanence. And this cyclical view of time is a subtle, bitter political reminder: kings in the past have fallen, and so will present ruling systems.

One of the film’s most powerful examples of the instability of those in power is the scene of a labyrinthine, eerie neon mall and movie theater showing a campy horror movie. This capitalist temple of spectacle—the Bangkokian mall in Khon Kaen—attempts to entrance moviegoers with sensational screaming on the screens (sound familiar?), so that they will follow regulations and file out of the theatre obediently.

Yet above the seats are strange, non-Bangkokian preferences for a mall: a multitude of fans whirring above, instead of air cons. This local flavor is even more significant as the theater’s light tinges everything different colors, finally settling on red, symbolizing Thailand’s color-coded politics, as well as the red shirt base in the Northeast.

From a Western perspective, scenes that show synchronized aerobics may signify an oppressive imposition on bodies and free will, since Western understandings of the self are based upon independence and autonomy. The Thai perspective, however, is of a more collective and interdependent sense of the self, where each person acts as if their behavior affects and is affected by others’ feelings and actions. So if we were to analyze this interdependence politically, it would show that the current political quagmire of Isaan, and on a larger scale Thailand, is not due to any one individual and their oppressive power, but passed-down, communally done acts.

As Itt, channeled through Keng, takes a walk on the empty forest grounds of the former palace, they encounter wooden signs with messages such as, “A tycoon the size of an ant will be noticed. A poor person the size of a mountain will be completely ignored.” The warring kings from millennia ago still have power over the poor soldiers of the present, able to sap their life force for their own fights. Indeed, this may be a silent scream, a voice of Isaan, an outcry against the region’s oppression.

Being political in Thailand, Apichatpong said in an interview, is like being stuck in a sad cycle of seasonal coups that people are powerless to break out of. Therefore, it’s much easier to “sleep” and escape into a fantasy world, for example by watching state-sanctioned news and TV, he said. Apichatpong’s oft-used motif of sleeping and dreaming, also seen in Blissfully Yours and Primitive, is especially significant and timely in Cemetery. The soldiers are afflicted with sleeping sickness, comparable to the real-life Thai military that is living in its own dream world, dragging the country through archaic, invisible conflicts. To the politically aware, or the “awake” characters, the sleeping soldiers are both amusing (as shown in the scene where nurses play with a soldier’s erection), and alarming (Jen meticulously fussing over Itt’s coma).

Soldiers are able to slip in and out of consciousness at the blink of an eye, much like citizens who constantly oscillate between complete political apathy and activism. In one of the rare moments that Itt is awake, he says to Jen that he wants to quit the army, since “there’s no future in being a soldier. I mainly wash cars for the generals.”

Itt suggests instead an alternative to being a soldier (that is, military rule)—selling fluffy Taiwanese moon cakes at gas stations in Isaan. Instead of a hyper-nationalistic, militaristic grip on the nation, perhaps another alternative is available, Cemetery suggests—opening up the country to more economic and cultural flows in all regions of Thailand.

Cemetery of Splendour is replete with dreamy images of Isaan, effusing the sun-soaked landscape with an artistic quality we rarely see given to the area. Long shots of mundane sights make us realize that Isaan and Khon Kaen are unique in having them: billboards advertising wedding studios specifically for Thai woman-Western man couples, a medium channeling in a sala (gazebo) by the Chi River, American hospital equipment effusing the schoolhouse hospital with neon lights.

As a Bangkokian, one of the things that struck me was the liberal use of the Isaan dialect in the film, rather than the Central Thai used in mainstream films and broadcasting. Reflecting many Isaan-ers’ real-life experience, characters in the film vacillate between the two dialects in different situations. Softer, rolling tones in Isaan are used to talk not just about agriculture and poverty, like Channel 3 shows would have us believe; Isaan is used to discuss US pop culture, international current events, calorie counting, and any other topic Bangkokians might assume to hear about in Central Thai. Isaan language also builds quick bonds between locals: strangers from the magical and real realms use it to break the ice, like when the Laotian goddesses visit Jen.

Nurses at the hospital gossip in Isaan, but when reporting to the doctor, they switch to Central Thai. Central Thai becomes the voice of authority from the far-off central part of the country. A visiting doctor leads a mediation exercise in mystical Buddhism that he says trumps the “suppositions” of local magic and spirits. Saleswomen for skin creams use a blend of both dialects to appeal to local customers as well as to convey capital authority.

English is also present in the film between Jen and her American husband, Richard. Their relationship disrupts the common, negative stereotype about the Thai woman-Western man pairing, since Jen is seen to be the more active, knowledgeable partner. “I prefer Europeans to Americans, because Americans are much poorer. Actually, it’s Europeans who are living the American dream,” explains Jen.

Apichatpong delivers subtle, bitter messages on Isaan-capital relations through Cemetery. Time is cyclical, and a coup is just a seasonal event. Sleeping, comatose soldiers live in the dream world of fantasy with the politically unaware, and even the “awake” have to go through rituals and routine motions. Isaan dialect is given central stage, a jarring yet welcoming contrast to mainstream media and its illusionary spectacles to distract the masses. “Hunger for heaven,” warns the Isaan forest to its oppressors, “will lead you to hell.” 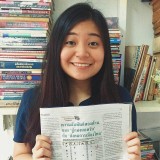 Asaree Thaitrakulpanich is a freelance writer for Prachatai English and other Thailand-based English news sources. She was born and raised in Bangkok, and holds a BA in Language and Culture from the Faculty of Arts, Chulalongkorn University.
Scroll Up