Skip to content
The Soul of Molam (3) – The dying capital of molam: Maha Sarakham’s molam agencies face their last days

Located in the heartland of the Northeast, Maha Sarakham City has been a transport hub for travellers and merchants for a long time. But it has also been a hub for Isaan’s performance arts and was once considered the capital of molam booking agencies.

Along the city’s Som Thawin canal, dozens of offices of molam agents were once busy taking booking requests from people from all across the region seeking molam troupes for festivals, temple fairs, weddings, and funerals.

As one enters through the door of the Siang Khampha Molam Center, the owner, Khampa Sisoda, or Siang Khampha, mutters a greeting from behind his desk.

For decades, the 76-year-old molam booking agent has been welcoming guests to his office whose walls are lined with fading photographs of popular molam performers. On a shelf, video compact disks by molam troupes and books about Isaan culture are on display.

Siang was born in Chiang Yuen district in Maha Sarakham Province and moved to the provincial city after finishing elementary school. He became a radio host at 30, airing his first show on an air force radio channel in the early 1970s.

“I hosted the show about Phaya Isaan for free and people called me Siang Khampha Phaya Yoi,” Siang recalls. Phaya Yoi refers to the courting poetry genre of molam.

But hosting radio shows was not his only passion. Fascinated by the beautiful language of the molam songs of his time, Siang tried to pen his own molam verses. He failed miserably at first, he says, but then started copying the styles of well-known songs.

“I found that you can gain skills by listening, talking, and observing,” Siang says. “In this way I was able to write my first verse for Phet Phang Phai, a molam troupe from Khok Ko subdistrict in Maha Sarakham.”

Many of the molam verses Siang wrote are still well-known among Isaan people. They include famous molam verses like “Pha Daeng Nang Ai,” “Temi Bai,” and “Achatasatru” for the Fa Si Khram group. Shorter verses he wrote include “Khao Na Wan San Khemi” for molam performer Weerapong Wongsilp and the Sangrawi company.

Carried by the sound of the Khaen, a free-reed mouth organ of the Lao people, traditional molam songs often tell stories and fables inspired by Buddhist scriptures and the heet sib song kong sib see tradition.

It was when Siang started playing molam songs in between his talks about Phaya Isaan that his radio show took off.

“Bringing together Phaya and the molam songs in the radio show made people know about molam more. They tuned in regularly and sent me letters with questions,” he remembers. “Some molam performers even asked to be featured on my show.”

As his audience grew and he received more and more requests from molam singers to be played on his show, Siang decided to open his molam center in Maha Sarakham.

Molam booking offices had been opening up all across the Northeast since the 1960 including the famous molam center of Prapa Tashu in Sisaket and the molam Association Tuta Borikan in Ubon Ratchathani.

Booking agencies and molam associations were a new invention at that time. They made it possible for people to easily book molam troupes from across the region for their events. Before events, hosts often had to seek out performers themselves by visiting them at their homes.

“The booking of performers has changed a lot over time,” Siang says. “In the past, molam bookings were not dealt through offices, but by word of mouth and through performers traveling on foot.”

Molam offices also boosted the work prospects for performers and enabled them to reach a wider audience. Siang says it also encouraged molam troupes to record and release their songs.

It was a golden time of popular molam culture in the Northeast with booking offices popping up all across the region, new local radio stations playing molam songs, and molam competitions being held in many places.

Siang believes that molam booking agencies and radio stations were key in connecting event hosts and performers and helped propel performers to fame and popularity through radio air time.

But with the arrival of the internet and social media, the business of molam booking was bound to change the industry. Media consumption has moved from radio and television to online platforms like Facebook and YouTube, enabling the audience to easily connect with the artists.

Since 2014, Siang says, the number of bookings has plummeted because event hosts have turned to social media such as Facebook to contact molam troupes directly.

“Molam performers and event hosts used to sign a contract with the molam agency, but now hosts usually call up the performers themselves,” Siang says. “There is also no more selling or buying of molam VCDs because everybody watches molam on YouTube and Facebook.”

But despite the rise of new media and the slow disappearance of molam offices, Siang is convinced that the genre will continue to thrive and attract a new generation of listeners.

Translated and edited by The Isaan Record.

Read the previous parts of our series “The Soul of Molam”:

The Soul of Molam (2) – Inside the molam bus project: The Sound of Isaan’s political molam 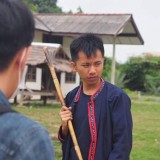 Panupong Thongsri is a fourth-year student at the Faculty of Education at Mahasarakham University. He writes about Isaan art, culture, literature and politics.
Scroll Up