Intrigued by Rabiab Watasin’s grandiose molam shows, The Isaan Record’s intern and photographer Mike Eckel followed the troupe to gigs in Chaiyaphum, Khon Kaen, and Roi Et. Mike focused on the story of the troupe’s costume creator, Phaibun Janthakhamut, and his craft.

Singer and dancers rush to add the final pieces to their outfits as a slow parade of basses and trumpets welcomes the night. Waiting for their call from behind the stage are the two-hundred-ninety performers of Molam Rabiab Watasin in a sea of feathers, colors, and sparkles.

The troupe is just beginning another show in Khon Kaen, the last one of over two-hundred this season. From ten at night to six in the morning, performers will change their outfits dozens of times, each inspired by song lyrics, music styles, or folktales.

As performers cycle in and out, Phaibun Janthakhamut, the lead costume creator, stays on call all night to ensure each costume is ready.

For a troupe of almost three hundred, Phaibun and his team of four are the sole manufacturers and caretakers of each and every costume.

A year of performances take Phaibun, his team and the troupe to all regions of Thailand, and occasionally Cambodia, with shows merging molam and luk thung with a dash of likay, western hits, and regional music.

What spectators witness at a show ranges from elegant interpretations of traditional folktales to dancers in tight outfits hip thrusting as singers belt out the latest pop songs.

The shows attract large crowds of all ages with older people and small children often sitting on mats calmly watching intently throughout the night while on the sides of the stage groups of teenagers show off their wildest dance moves.

As the crowd marvels at the show, Phaibun and his team work tirelessly throughout the night from behind the stage to assemble costumes and mend broken pieces on an old sewing machine.

Phaibun hurries to fix his battered sewing machine to resew the shirt of a dancer. One truck trailer, full of quick-fix materials and one sewing machine is Phaibun’s sole work station while on the road.

Born and raised in rural Roi Et province, Phaibun followed his sister to work in Phuket after finishing highschool. But on a visit back home, he went to a molam concert and immediately fell in love with the artform.

He left his work in the South and applied for a job with Molam Rabiab Watasin. But having no experience or formal training in costume design, Phaibun first landed a gig as a dancer. It would take five years of dancing for audiences across the country until he discovered his true calling behind the sewing machine backstage.

“When I look back on the time as a dancer I feel I was quite childish,” he says. ”I also had a growing feeling then that I wanted to be behind the scenes.”

In his time as a dancer, he grew close with the crew’s costume creators. He learned from them how to work with different fabrics and turn design drawings into fabulous costumes.

“I was drawn by the process of it, working with the fabric and all,” he says. “The older staff saw my interest and began teaching me more seriously, up until the point they left. Then, I replaced them.”

After arriving at the venue, dancers quickly set up their makeshift “dressing rooms” behind the stage. The quality of performers’ dressing and rest area varies greatly, given each location. Some days they have the luxury of being covered by a nice temple or warehouse building; other days they set up tents on a stretch of gravel. Right now, their space is the first floor of the crumbling structure of a never-completed building.

The night starts slowly as performers take a few hours to do up their hair and make up. Once the show starts at 10 p.m. and until 6 a.m., the backstage area becomes a flurry of outfit changes, makeup, hair, and costume adjustments.

Each year, Rabiab Watasin plays one show after another throughout a nine-month season. The troupe’s only chance for rest is while traveling between performance locations and between sets.

Sumitsak Phonlam, the troupe’s general manager, says the numbers of performances vary from year to year, but the number typically ranges between 100 to 200. Last year, Rabiab Watasin played over 200 shows.

Costumes vary depending on the season. n the cold season, or when we open the performance season,” Phaibun says, “we will really blow out the house, meaning costumes will be in their largest and most grandiose form.”

During the hot season, costumes will have less feathers to keep dancers cooler, and even fewer during the rainy season to keep the feathers dry.

Phaibun explains that all costumes are divided into five categories: the base layer underneath the costumes, the head pieces, blouse, back/tail piece, and jewelry.

Molam outfits have become increasingly more complicated over the generations, Phaibun says. “In the past costumes would have an inner shirt and pants. They would only change the color of the shirts and pants for different songs,” he says. “But today, since we have full body suits, we change the entire outfit, as you don’t have inner shirts or pants.”

Rabiab Watasin’s costumes become more arrayed depending on the crowd size, and the variety and flamboyance of the performance. What catches spectators’ eyes especially is the flurry of red, orange, and pink feathers adorned by the background dancers. These are the most common category of outfits to be seen all night, typically seen in six to seven songs.

Phaibun says these designs are inspired by cabarete costumes. His team takes certain themes and designs from a cabarete outfit, and then customize the design to fit Rabiab Watasin’s style.

The cabaret outfits demand the most time and energy out of Phaibun and his team. Before each performance, they spend hours “feathering” the head and tail pieces of the outfits.

“We need to remove, collect, and change the feathers every day,” Phaibun says. “The only thing left is the body piece.” The suits can’t get wet. If they do, suits need to be hung up and aired out, taking additional time.

Since Rabiab Watasin was founded in 1957, the troupe’s array of costumes has gone through many changes and grown more diverse.

“To put it simply, traditional molam performance outfits were made out of simple clothes of a local style,” Phibun says. “But today the style is stronger, more innovative, and it has gone through many steps from what was traditional molam.”

One common change in all outfits over the past generations is the addition of mirror pieces and fake jewelry. “Before performers wore just whatever; basic style was male or female sarongs, cottons, and local fabrics,” Phaibun says. “You wouldn’t have all the decorations or elaborate stones and jewelry.”

The evolution of costumes has also been influenced by a blending of musical styles in molam performances.

“Like anything else today the styles have followed modern trends,” comments Phaibun. “The designs were increasingly adjusted to become more and more international and chic.”

“Style developments have been influenced by the internet and the exchange of ideas online, and likay,” he says. “It’s basically as if the styles have copied likay, what looks sexy, flashy, sparkling, brilliant.”

According to ethnomusicologist James Mitchell, many of Rabiab Watasin’s shows are updated versions of lam mu from the 1960s and the Isaan luk thung shows of the 1970s. Lam mu is a dramatic form of molam with similarities to likay, a popular Thai folk theatre.

As Rabiab Watasin travels to perform around the country, it adapts its shows to different audiences and regional preferences while still incorporating elements of Isaan culture. In the South, shows include Southern luk thung songs which often feature Indian or Arabic flavors, and also draw on significant southern folk musical styles, according to ethnomusicologist James Mitchell.

The shows and costumes of Rabiab Watasin depend entirely on the requests of those who hire them. The performances can vary widely as each season brings them to all regions of the country and at times to Cambodia, as well as to Chinese and Western audiences.

Phaibun said that if hired by a foreigner or expect a foreign audience, the troupe opens with songs like Gloria Gaynor’s “I will survive”, which has been a molam concert staple for decades.

But even as the troupe accommodates different tastes, the shows always include elements of Isaan culture even when they perform in other regions.

“There is clearly a philosophy of wanting to educate about past Isaan cultural forms,” says Mitchell about Rabiab Watasin’s repertoire.

Despite Rabiab Watasin’s abundance of traditional costumes and performances, they have also been introducing Western show culture and costumes to match the tastes of their ever-diversifying audiences.

Phaibun says “We have a lot of variety in our outfits, but we will always emphasize what’s popular today or what allows people around the world to know molam music.”

The stars of Rabiab Watasin are the so-called pra-ek and nang-ek, the male and female leads. Their costumes are designed to make them easily distinguishable from the other dancers. “We don’t want them to look too soft, too sexy, or sour, and they need to look different from the villains or other characters,” says Phaibun.

Unlike regular dancers, the female and male leads have full say over the design of their outfits; Phaibun and his team seek their approval for each aspect of the costumes.

This headpiece is designed to honor the Lao folk belief of the Phaya Naga, a mythical serpent-like creature worshipped by the peoples along the Mekong River. Phaibun said they conceptualized the outfit to replicate designs of past generations as closely as possible.

The design and creation of these traditional headpieces is not in the hands of Phaibun and his team. The troupe has a separate team of five expert hatmakers who create the headpieces from scratch by using gold paper, paper mache, and ornaments like fake jewelry.

Each new season Rabiab Watasin throws out the songs of the previous year and choose new ones for each style of music. For Phaibun and his team, it means outfits need to be adjusted, scrapped, or made entirely from scratch with new materials.

“We buy our fabrics from Bangkok from various different suppliers, which we must do since our costumes cater to so many different styles,” Phaibun says. “But we’ll buy in bulk quantity, maybe 300,000 to 500,000 baht worth of one cloth.“

But the process of costume design starts with the troupe’s dance choreographers and music teachers who come up with costume ideas. Each new season Phaibun and his team are presented with various designs via sketches or pictures.

It is their job to craft a design plan and budget, and to present these to the general managers. Phaibun and his team along with the general managers and the team of choreographers and teachers finalize plans for outfits in the upcoming season together.

For the audience, this annual process ensures that costumes, songs, and dancers at each show vary year to year.

Phaibun dressed up in a costume at Rabiab Watasin’s headquarter in Khon Kaen where the troupe celebrated the end of a successful season in 2019. 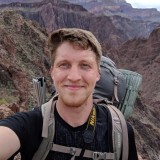 Michael Eckel first came to Thailand in 2016 while participating in a study abroad program on the effects development and globalization in Thailand's Northeast, with CIEE Khon Kaen. There he developed an interest in Thai and Isaan studies. As a photographer, he strives to tell the life story of his subjects, as it is express through their most honest and raw moments, mundane to unique.
Scroll Up